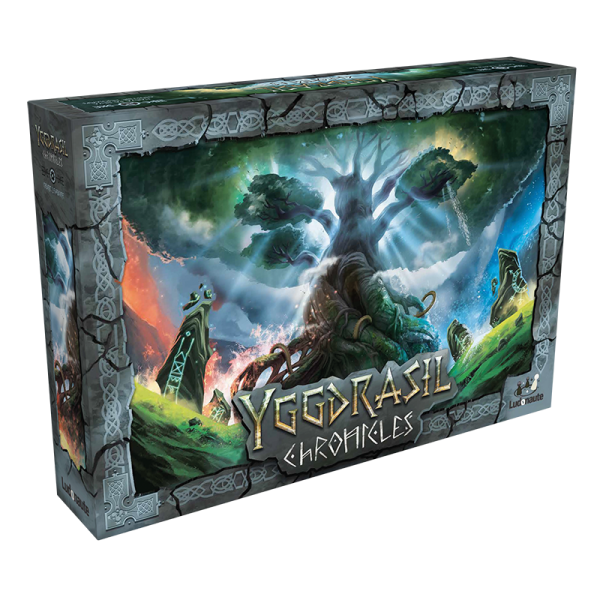 Beschreibung Bewertungen 0
Beschreibung
In Yggdrasil Chronicles, each player takes the role of a Norse god and attempts to keep evil... mehr
Menü schließen
Produktinformationen "Yggdrasil Chronicles"
In Yggdrasil Chronicles, each player takes the role of a Norse god and attempts to keep evil forces from devastating the nine worlds, destroying the world tree Yggdrasil, and surviving the onset of Ragnaro¨k.
To set up, each player takes one of the seven Norse gods, 5-9 life points (depending on the player count), and a set of cards showing the six enemies who are attacking the nine worlds; you shuffle these enemy cards and place them next to you. These nine worlds are represented on a three-level, 3D game board, with the board having locations for artifact cards, creature cards, hero pawns, elf pawns, anonymous pawns, and more. Each level of the board depicts three worlds on it, and the middle board rotates.
At the start of a round, each player places the top card of their enemy deck on the "Wheel of Enemies". Players can take turns in any order. On a player's turn, they first reveal their enemy card.
If this is the first appearance of this enemy this round, the player continues their turn; if not, then the enemy is activated, typically moving to a different world, then taking some action.
If the enemy can't move, e.g., Surt is supposed to move up a level, but is already on the top level, you lose the game. If the enemy can't take its action, e.g., Loki needs to place an Iotunn pawn, but none remain in Iotunheim, you lose the game.